Learn about the potential issues that occur from excessive disputes, and how to avoid them.

The two calculations are best understood with an example. Let’s say you processed 1,000 payments in a given week. In that same week, you also received 10 disputes.

The dispute rate is a more accurate representation of fraud and disputes for your business, because it shows which actual payments were disputed. For example, you could use the dispute rate to see a particular sale that resulted in more disputes than usual, or to pick out fraud attack patterns.

Because cardholders can dispute a charge up to 120 days after a payment was made (and sometimes even later), the dispute rate might change for dates more recent than 120 days old. We show this calculation on the Radar for Fraud Teams page in the Dashboard. 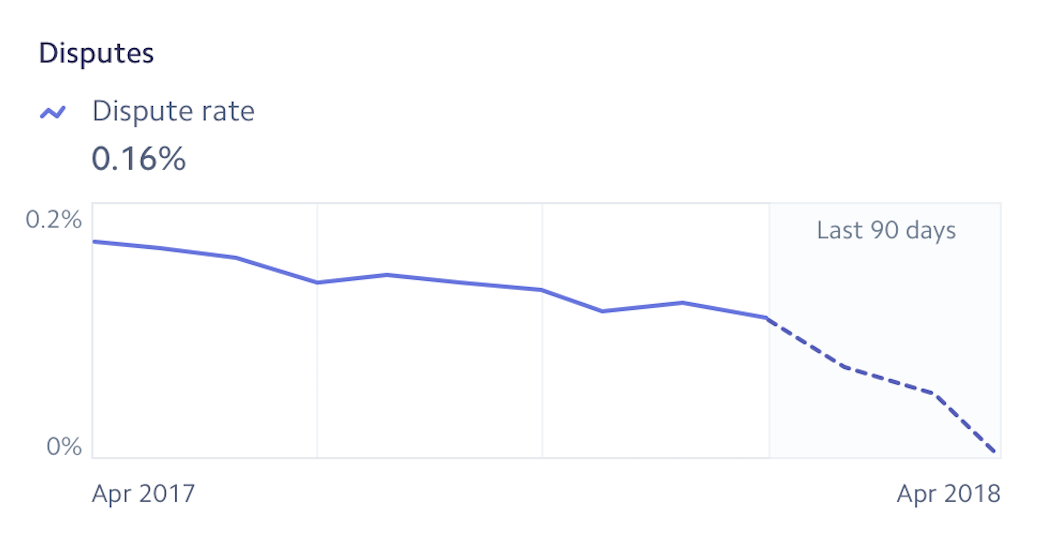 Each card network maintains a series of dispute and card fraud monitoring programs that apply to businesses operating with high dispute activity. Excessive dispute activity not only affects your ability to process with Stripe, but with other processors as well—and can even result in fines from the card networks. All disputes, whether they’re won or lost, count towards your dispute rate, so the best strategy to avoid monitoring programs is dispute prevention.

The credit card processing industry standard recognizes dispute activity above 0.75% as excessive, but other factors, such as a sudden spike or steep upward trend can trigger placement in a monitoring program before dispute activity reaches the 0.75% threshold. For this reason, if we ever see higher dispute activity or a significant increase in potentially fraudulent activity on your account, we’ll proactively reach out to see how we can help.

In some cases, our machine learning models can predict if your account might be in danger of excessive dispute activity at a point in the future. If that happens, we’ll alert you so that you can take proactive steps to identify and prevent disputes and fraud.

Though we can predict dispute trends with some confidence, we cannot predict which particular payments will be disputed. Keep in mind that we cannot be certain of the predicted rate—your actual dispute activity depends upon any further disputes received.

Early fraud warnings (EFWs) are messages from Visa and Mastercard that card issuers on these two networks generate to flag payments they suspect might be fraudulent.

These aren’t informational notes from the card networks. EFWs do sometimes provide the opportunity for you to refund a fraudulent payment before it becomes a fraud dispute, but they’re equally as important when used as a metric by the networks to measure a business’s propensity for fraudulent transactions. Visa in particular counts these fraud warnings toward identification in their VFMP monitoring program.

Now that you have learned about measuring disputes, you may want to learn more about how to prevent disputes, or move on to related subjects: